0
was successfully added to your cart.

The history of Eitz Chaim mirrors the history of Toronto’s Orthodox Jewry over the past century. Eitz Chaim’s metamorphosis from a one-room cheder to the multi-campus institution it is today is a moving testimony to the transformation of Toronto from its spiritually bleak state a hundred years ago to the vibrant, world-class centre of Jewish orthodoxy it is today.

Known then as the Poylishe Talmud Torah, Eitz Chaim began with a few students in one classroom guided by one teacher. Its establishment was powered by the dreams of a few community leaders; they responded to the less than perfect education offered by the few available private teachers. These forward-thinking individuals recognized that Orthodox Jewry in Toronto would not survive without a Jewish day school to sustain it.

Its first premises were in the Elm Street Shul with 30 students in two classes, who attended four-hour nightly sessions at the end of the regular public school day with an additional six hours on Sunday. In 1916 Eitz Chaim purchased its first building on Chestnut Street, and in 1917 Eitz Chaim obtained a provincial charter to open a religious school, and also purchased the Italian Club at 68 D’Arcy St. to accommodate the school’s growing enrollment. By 1929 the school had 300 students growing to 600 in 1938 with 138 students paying full tuition. 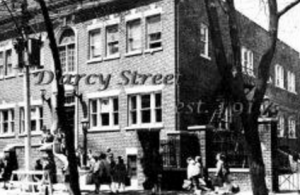 From Cheder to Full-Day Program

In 1949, a full day program was opened. Beginning with only a grade 1, new grades were added every year until grades 1 through 9 were in place. It soon became apparent that a day school in which students could be immersed full-time in the study of Torah along with the required secular subjects had become an absolute necessity. Throughout the decades since the 1950s, following the geographical shift of the Jewish population northward, campuses were added on Burnside, Viewmount & Patricia Avenues, followed by the Thornhill branch in 1988.

Throughout this period of development & growth, Eitz Chaim formed and maintained a bond with the leadership of UJA. Both organizations, committed to the strengthening of Klal Yisrael in Toronto, worked together to ensure that Jewish day school education would become a foundational platform for the strengthening and growth of the community. UJA was more than just a financial backer. UJA provided professional consultation through its Board of Jewish Education, and through its community planning process.  This partnership, generosity of spirit and goodwill has been based on the Talmudic dictum “Kol Yisrael areivim zeh bazeh (all Jews are responsible one for another)

Today, Eitz Chaim serves 950 students on 3 campuses. More than that, Eitz Chaim has become a community legacy, through which generations of Torontonians have been educated. Many of its current student body are the children, grandchildren and great-grandchildren of alumni. The original hope and dream have become a reality. In reaching this centennial milestone, Eitz Chaim Schools recognizes the important role UJA has played in its growth and stability and is honouring UJA Federation with its Hakaras HaTov Award at it s Centennial dinner, on June 6, 2017. Thus, Eitz Chaim, like UJA, has become an institution, which is self-perpetuating—yesterday’s graduates have become today’s parent and grandparent body. Eitz Chaim looks forward to the continuation of its partnership with UJA in building a strong and proud Jewish community here in Toronto and across the globe.